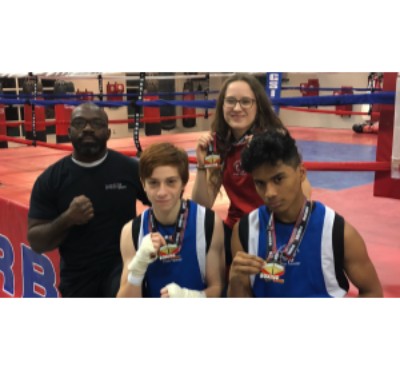 Waterloo Boxing had 8 athletes registered for the Provincial Championships held Toronto with 5 actually competing. Champions are William Yol Cano (Gold), Isaak Toleff (Gold). and Katelyn Vanderlaan (Gold). Justin Marquez won silver and Mario Rados and Jason Marques came away with the bronze medals. Thaydon Brown had no one in his weight category.

Willie and Katelyn have qualified for the 2018 Canadian National Championships to be held in Edmonton Alberta in late March.

Mario Rados(Bronze) – lost a ‘gutsy’ back and forth battle with a tough opponent. He has boxed Jesse Greene of Big Tyme Boxing twice in the past and has been stopped both times. This time the match went the distance with standing 8 counts on both sides but ultimately he lost on points.

Jason Marquez(Bronze) – lost a tough match against Lucas Bahdi, a strong and very experienced boxer. This was Jasons first bout as an open class boxer.

William YolCano – avenged a loss in his final, and won in dominating fashion. Will faced Max Bomines of Kombat Arts in a rematch of his first bout ever. Both boxers received praise from Boxing Ontario and will be representing WRBA and BO at the canadian National Championships.

Katelyn Vanderlaan – Was awarded the provincial championship by walk over, but we organized a makeup bout to get Katelyn some more ring experience. She boxed very well and controlled the bout from bell to bell. She won her bout by TKO in the 3rd round.

Isaak Toleff – Fought a tough opponent in the semis, and receieved a cut under his eye for his efforts, and also avenged a loss in his final to claim gold and the title of Novice Ontario Provincial Champion.